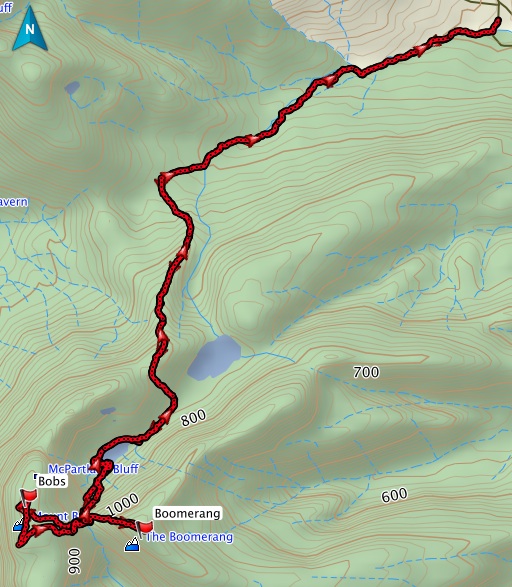 Route to Bobs and Boomerang (click for larger image)

Got a little extra time, feel like procrastinating from more work, and really feel like I shouldn’t be able to sleep anymore but at the same time like I could sleep forever, I figure I may as well post another walk. So here’s one I did a few weeks ago to Mount Bobs and Boomerang. I was a little disappointed with this one, perhaps unjustly so, as I’d been spoilt with great easy walks and weather the weeks prior to it, and was hoping for the same. Lack of research meant I wasn’t mentally prepared for the not enormous but annoying enough scrub, and not so clear pad up to the peaks after Lake Sydney. It should be noted that many people quite like this walk! 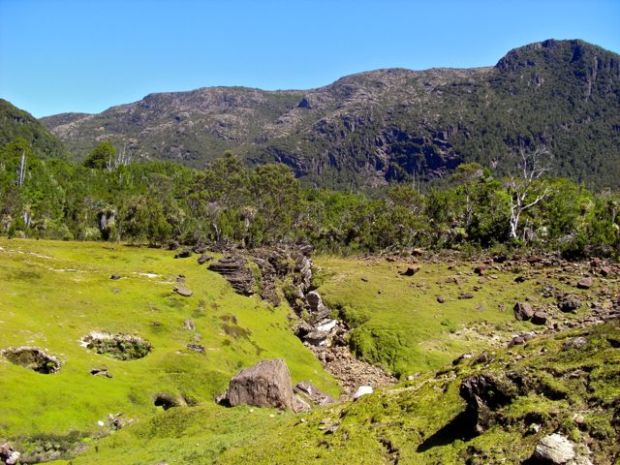 Anyway, the walk starts along the Farmhouse Creek track, the same one used to access Federation Peak. You get there by following the same directions to Mount Picton, but instead of turning off West Picton road you continue along it until you reach the car park on the left. You then follow the Farmhouse Creek track for 4km or so, which can be very muddy, even on a dry day. After pushing through some cutting grass and bauera you come to a tree with lots of different coloured tapes on it, and the Bobs/Boomerang track turns to the left, while the Federation Peak track continues on. The cutting grass and bauera continue for a couple of hundred metres, with a small campsite (no water) half way through. Then you’re out into rainforest, which is much easier walking, though there’s still quite a few fallen trees to negotiate. In some parts the forest opens out so much that it’s a tad difficult to follow the track, and care has to be taken to locate markers. I was again walking in in the afternoon (4pm) after a day’s work, so I was glad of a gps route from a friend to follow instead of having to search around too much. 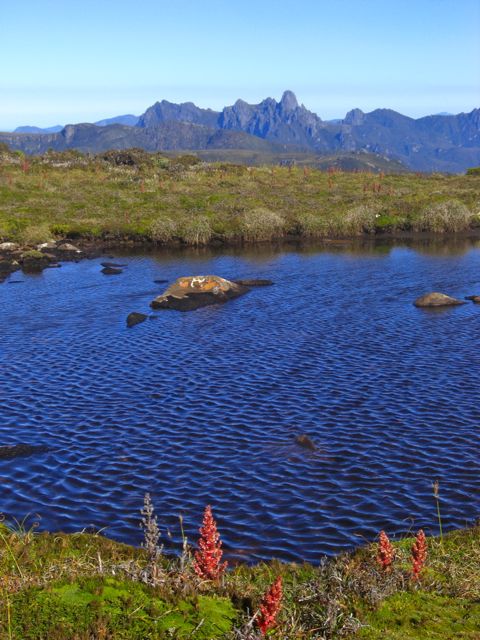 There’s one lookout on the way, which gives a view of Federation, the Southern Picton Range, Picton and Riveaux, otherwise there’s very little views. The last bit of the track before reaching Lake Sydney and the sinkhole is very muddy and boggy, and I did it after a stint of hot weather and on a hot day. I wouldn’t like to be doing it in the rain!

Wanting to get up onto the ridge or even onto the Bobs plateau so I could enjoy sunset or sunrise, I passed the general campsite at the northern end of the Lake near the sinkhole, and continued round the western side of the lake until I reached the southeastern end. I started up a riverbed but decided it was already too dark in the forest and there was no clear track, so I thought it best left for the next day. It was shortly after 8, and I hadn’t realised how quickly the days were starting to shorten. 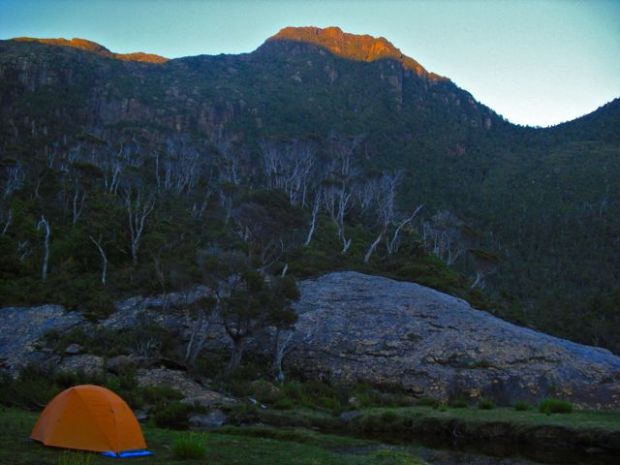 The next morning I awoke and packed a daypack to go and explore the two mountains. I had no idea if there was a pad through the scrubby gully you have to climb up to get to the ridge, so I just made my own way up. It wasn’t so bad, but there were parts I was glad I didn’t have my full pack on. I only found a taped route (much easier going) on the way back (but managed to loose it just before getting the whole way back)!

Anyway, one hour later I was on the saddle, and decided to head up Bobs first. The pad was difficult to follow, and at one point there are cairns to the left that take you over rock (only found this on the way back!) and tape to the right through scrub. I only saw the tape, and headed that way, but lost it shortly afterwards and ended up scrub bashing my way up, not too hard though, just annoying. I’d take to the rock if you had a choice. Final little scramble and I was up on the plateau, looking for a high point, only to be very disappointed. Not only is there no real high point where the summit is, someone’s gone and put a cairn in the middle of a dip! But quickly forgot Bobs and was taken by the views of Federation!! It was cemented as one of three priorities for next summer.

Aware that the wind was picking up, and I’d left my tent out to dry pegged into some pretty soft ground, I didn’t dally too long, just wandered south to check out the route to Bobs Knobs (left for another day) and then headed back down to the saddle and up to Boomerang. The pad up to the Boomerang was easier to follow, thanks to the scrub, and less of a climb, so it didn’t take long. Unfortunately the summit was equally flat, though the views of the Southern Ranges were inspiring, and they’re also part of that list of three priorities for next summer!

Southern Ranges and PB from The Boomerang

I really hurried down after that, the wind attempting to blow the hat off my head (and succeeding once), and pushed on down the scrubby gully, made a lot easier by sticking to the pink taped route, until I lost it shortly before getting back to camp. It was pretty warm by then, and I had a quick dip, but not too long because the tent really was blowing around and I didn’t need a repeat experience of the tent incident on the Frankland Range!

So I packed up, and given it was only shortly after midday I figured I may as well walk straight out, save me getting wet the following morning, which was forecast to be very wet.