Today was a Pandani walk, up in the northeast, and given the weather we couldn’t have chosen a better place to be! We all expected to be walking in whiteout – that’s what it looked like as we set off, and the organiser for the walk has just a bit of a reputation in that department! But we were lucky, though we saw plenty of localised rain and snow showers around us as we stood on the three peaks we climbed, we only got caught in a few, and they lasted no more than 5-10 minutes at the most before the sun was back out. So rather than making things miserable they added an extra element of surprise and enjoyment.. after all how many times have you been caught in a sunny snow shower?!

Anyway, we set out at 6am, because although both walks were relatively short, the drive was decent. We also seem to have a bit of a tendency to enjoy ourselves too much, and are never in too much of a hurry to race through a walk! It was 9.15 by the time we came to the gate on Cabin Road, got geared up and headed off up the last bit of road to the car park below East Tower Hill.

Ehm.. the only ‘off track’ bit of the walk up East Tower

The road winds through beautiful tall Eucalypt forest, and it’s not long before you arrive at the car park. This is where the Abels description starts, and it’s pretty accurate. If you want to climb East Tower Hill it’s best that you’re illiterate for the day, and are either small enough to slip under the locked gate, or happy enough to climb around the side. Then you just need to take the stairs to the top, and enjoy the views :). It was rather windy up top for us, but it gave us a good look at the lie of the land towards West Tower Hill, our next target, and an idea of what the weather was doing – a number of small localised showers but nothing too concerning.

When the wind got too cold and we’d taken our photos, 45 minutes after having left the cars, we headed back down, and headed off through the bush towards West Tower Hill, again following the Abels description. We dropped down on a westerly bearing until we reached the ridge line that would take us across, and intersected an old road. Though the going had been quite open to that point, it was now even more open. We chatted away, spent time examining bird orchids and a moth-like butterfly that was completely camouflaged when its wings were closed (well spotted by our leader). 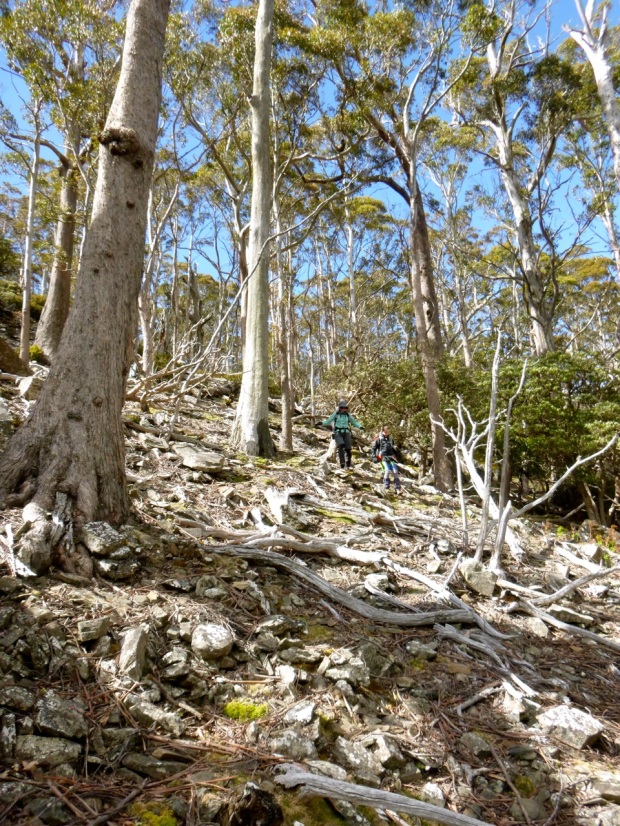 Down off East Tower and through open forest

Then we ran out of road! Also as described by the Abels, there was a stake with tapes on it, and a cairn. We made a bit of a mistake here and didn’t find the tapes, heading left and up instead of straight ahead, but soon ran into a newly pink taped pad and followed it up. We discovered on the way back an old faded orange taped route that would get you onto this pinked taped pad with a bit more ease.

The pink tapes were very easy to follow up and over the eastern end of the ridge but once on top we found they just stopped. Instead of following the last two up onto the crest of the ridge, we picked up a red and white stripped taped route, that headed back down the other side. This continued around the side, marked with cairns where tapes weren’t appropriate. There is one part on a scree field marked by a larger than normal cairn which also sports a piece of red and white tape, where cairned route meets up from below. It’s worth taking note of this to ensure you take the right way back when descending. It’s possible this lower route takes you to one of the forestry roads that ends to the east of West Tower Hill, but that’s just a guess. 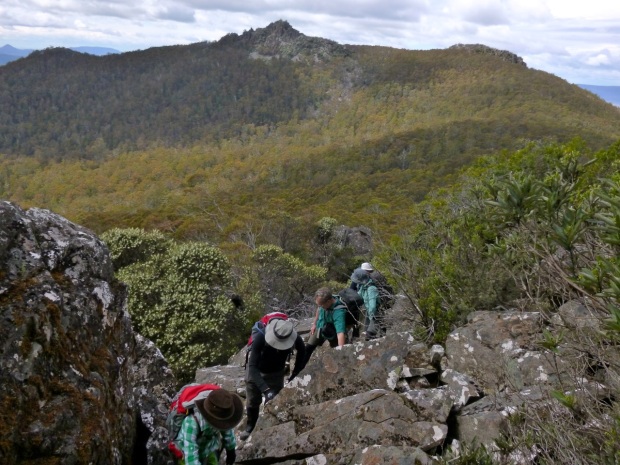 Heading up onto the eastern end of West Tower, East Tower in the background

The route keeps you sidling along the ridge, just below the top. There’s a number of times you think you might nearly be there, only to round another corner to see there’s further to go. And then finally you’re heading straight up to the top of the ridge, and you pop out onto a small summit, marked by a poorly looking cairn. There’s not a lot of room, but the 8 of us managed to tuck in amongst the greenery, sheltering from the wind, and eat a bite of lunch as it snowed. It was almost 3 hours after having started out that we left the summit, driven down by the sight of another impending snow shower. Down was faster, and when we arrived back to the spot we’d hit the old road, we opted to follow the road back, avoiding both the climb and the small sections of light scrub we had encountered as we’d headed down.

This was both much easier, and meant we got to meet an echidna! We were almost as low down as we’d been all day, but had our third and longest snow shower, this time completely in the sun :D. Back at the cars at 3:40, we’d been gone nearly 6.5 hours for 10 km and 630 metres ascent.

On the summit of West Tower Hill

Byatts Razorback was just a short drive away, so we headed over, opting to drive as close as possible to the summit on the southern side (road NOT marked on the 1:25,000 maps, but newer and nicer than the road to the north). The ascent looked more gentle from this side, if a little scrubbier (we’d spotted decent scree fields on the northern side from West Tower Hill). This was probably a good thing, because as we arrived, it had started to hail. Well, it was a cross between hail and snow. It didn’t pelt down like hail, instead fell almost like snow, but was round and held its shape long after it landed on the ground. Like polystyrene was how one girl described it. It was really quite nice!

We did, however, wait until it had stopped (4.30) before heading up the 165m of climb and 680m of horizontal distance. Not that it made much of a difference, because it started up shortly after we left! The terrain was typical of the area, dry open forest/scrub with a bit of rock in between. There wasn’t a pad of any sorts, save from what appeared to once have been an old road, and someone who had put a rock or two on old stumps. But it’s not really needed, as navigation is easy enough. 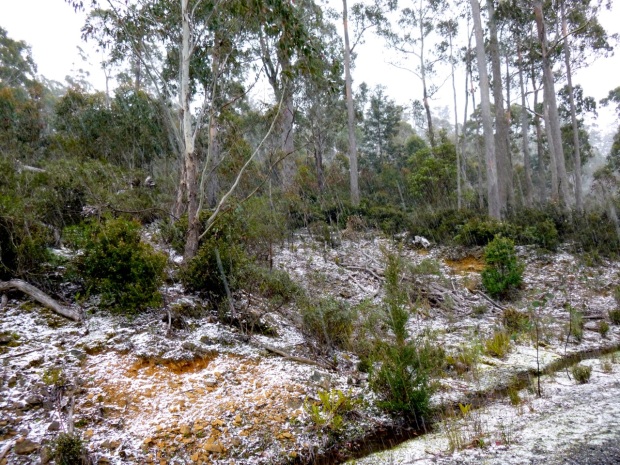 Just a bit of snow/hail.. an idea of the open scrub we headed up through to get to Byatts Razorback

By the time we popped out on top, the skies were blue again, and the sun was starting to dip down towards the west, over the Ben Lomond plateau. It was just past 5pm. We spent a bit of time relaxing on top, and I know I for one was in no real hurry to end the day. There were nice views back towards East and West Tower Hills, and it was nice to be able to take in the three summits we’d climbed. But everything good must come to an end, and half an hour later we moved off, back down to the cars, following the old road for longer, a nice reprieve for weary bodies. Back at the cars by 6, we were all up for a decent meal at Burger Me. The 8 year old amongst us probably had the most energy left by this stage!! Pretty impressive effort on his behalf, and I sense there will come a day when none of us can keep up with him! 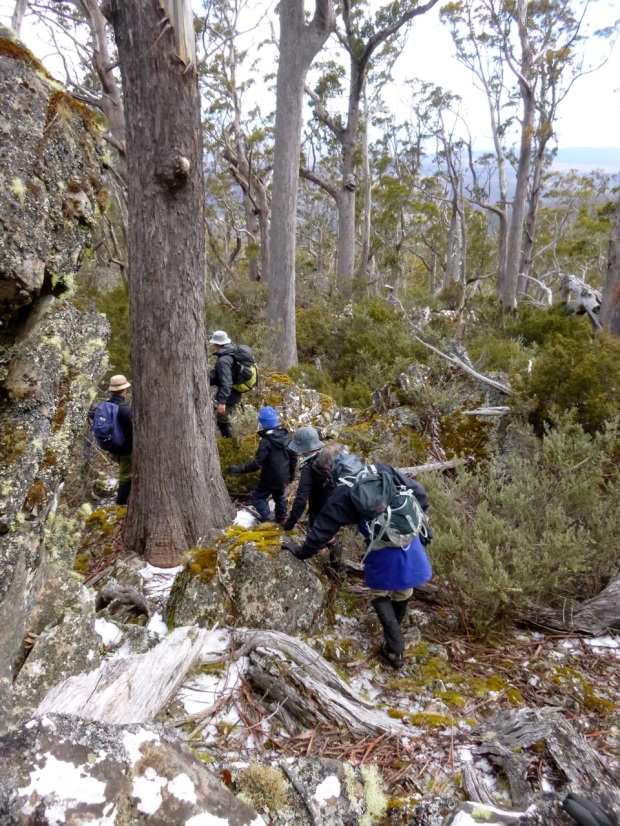 Lounging round on the summit.. East and West Tower Hills in the background 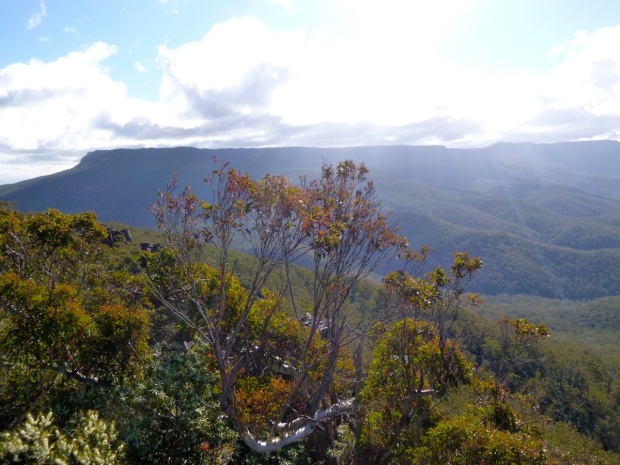 View towards the Ben Lomond plateau from the top