Little Eldons GPS route (ignore the straight line, the GPS ran out of batteries on the way back)

It’s always exciting when you haven’t been walking for AGES, and you know you have 4 days and some good weather. Our choice this time was the Little Eldons – not an official name, I don’t think, but that’s what they are. The Little Eldons includes the smaller range from Pyramid Mountain to Last Hill that runs east-west and sits south of the Eldon range. This was to be a ‘get fit’ trip in preparation for the POW, which didn’t actually happen due to the bushfire situation.

We knew a little of what we were in for, having walked out Pigeon House Hill track from the Eldon range a few years ago, and from other friends’ trip reports and photos. We also knew we were very unfit, which was apparent from how long it took us to pack and how rusty we felt doing it. What had once been a streamlined process took double the time it should have!

Sure enough, after getting home from a Christman night shift, we drove up and enthusiastically began the plod up Pigeon House Hill. We could feel the unfamiliar weight of a full pack on our backs and the strain in our legs and lungs almost immediately. My knee started niggling. The heat was oppressive. It took much longer than we expected to make it to our campsite at the base of Rocky Hill, and we were so tired we didn’t even get round to writing notes.

And home for the next three nights is in that bowl over there, under Rocky Hill

Walking in, we were greeted with familiar mountains

There was to be no reprieve though, we had two even bigger days to follow. For the first we decided to head up Rocky Hill and to the west. We found the scrub free route up pineapple grass to the Rocky Hill ridge, thanks to our GPS route from our Eldons trip. We would further refine this route throughout the the trip – we’d walk up or back from the camp site a total of 4 times.

It didn’t take us long to be back on top Rocky Hill, where we weren’t surprised to find there was no water. The ridge to Camp Hill was obvious, and we headed initially in a NW direction along an open topped ridge, before dropping down into open forest. It took some attention to ensure we stayed on the ridgeline, which was pretty narrow at the saddle. The climb up the far side then began to Camp Hill.

From memory (which is a bit fuzzy by now), the scrub was worse climbing up Camp Hill than it was between Camp Hill and Last Hill and it took us 3 hrs (from Rocky Hill) compared to 1.5 hrs (from Camp to Last Hill). By the time we arrived at Last Hill it was mid afternoon and we were tired and a little scratched up. We took a few summit photos, before heading back to camp. It was a VERY tired plod back, and it felt wonderful to sidle around the northern side of Rocky Hill and drop back down to camp.

I was ready for bed before the sun had even set. Fortunately Graham was still doing his teeth and told me in no uncertain terms I’d better get out of the tent. I didn’t quite understand, but it was quickly apparent. Not only was there a full rainbow on the horizon, the sky was bright pink. While Rocky Hill blocked our view to the west and therefore the sun set, the effect to the east was possibly just as spectacular. It was enough to put a smile on our weary faces.

Looking back at Rocky Hill from Camp Hill summit 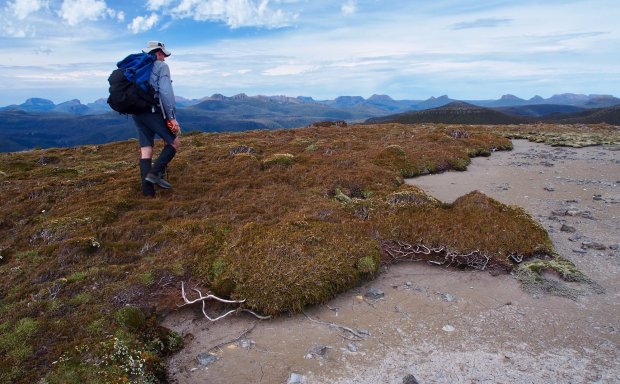 High Dome and a few other friendly faces

Day 3 we were headed in the opposite direction, to Pyramid Mountain. We knew there was a pad to Junction Hill, but had forgotten how overgrown it was. Our knees were already tender from the previous day, and this part definitely woke us up. Junction Hill was almost as dry as Rocky had been, though we found one or two small puddles that we would later return to when we needed to fill our bottles.

The ridge to Pyramid Mountain looked great from here, and we headed off happily across low alpine heath in a SE direction. A few very old pine markers were redundant on such an open ridge given the sunny weather we had. They might have been more appropriate in a whiteout, except that they petered out unexpectedly! When the ridge turned 90 degrees to the left, and we had to head more NEE, we hit the worst bit of scrub. The knees were on fire now, and Graham decided it was worth wearing overpants despite the heat. It’s amazing how you forget simple lessons when you haven’t been walking, and I decided I was going to try the walking in long pants from now on for scrubby walks! I was too stubborn to sacrifice my overpants this time though, so we made quite slow progress through the scrub. The worst of it was at the start, after which it was much easier to weave an open path and avoid the big clumps.

We chose not to climb up and over the next high point, but sidled around on the contour. This meant we stayed in fairly open forest where the going was easy, until we popped out onto the next saddle, which was open. And then we just had the climb up the mountain! We zigged and zagged, keeping the rocky parts and avoiding the scrub. It was really hot, and we were pretty tired, but eventually got to the top. While the views were stunning, the ants detracted from the dining experience, and we didn’t spend a lot of extra time on top after we’d eaten.

Once again, the plod back was a slow and weary exercise in putting one foot in front of the other. The only energy we had left came from the satisfaction of knowing we’d achieved what we’d set out to do. We slept long and deep again, barely aware of the rain on the tent.

The walk out was not a great deal faster than the walk in had been, because we weren’t in any rush. We took the time to avoid the scratchy scrub as best we could, enjoy the birds, avoid the snakes and take photos of the Christmas bells.

Harsh light, but works for silhouettes.

Towards Gould’s SL and a friend (we discovered later) 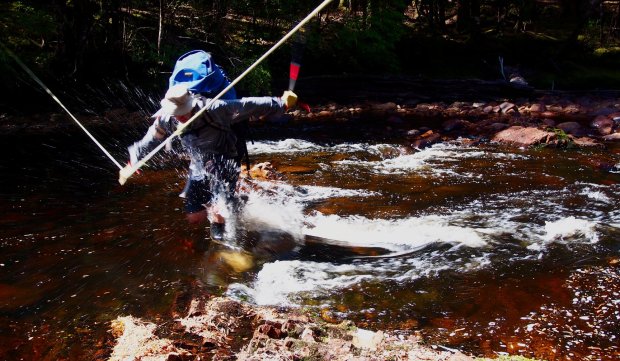 Reacquainting myself with the mountian flowers 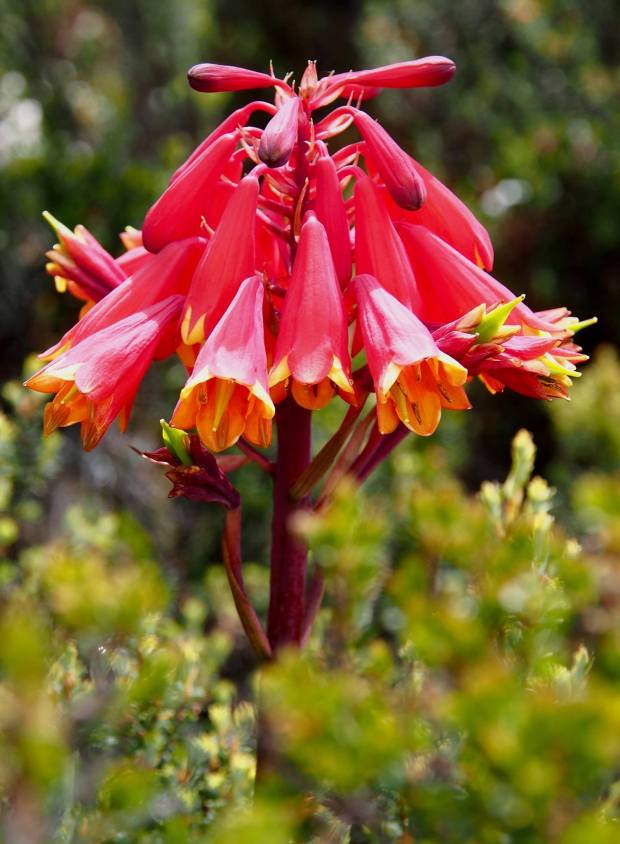 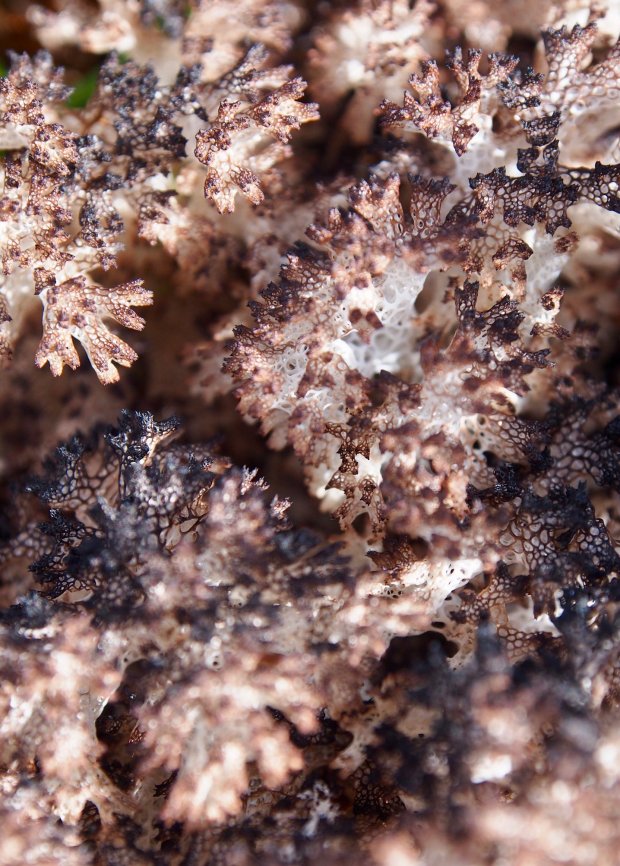 And a bit of lichen stuff….