So, after a wet walk up Burgess Bluff and Mt Chapman the day before, not to be deterred, but deciding for an easier option given my minor mental test of the day before, I headed up Hartz and Snowy. To get there, drive to just before Geeveston and take the Arve road, following the signs. 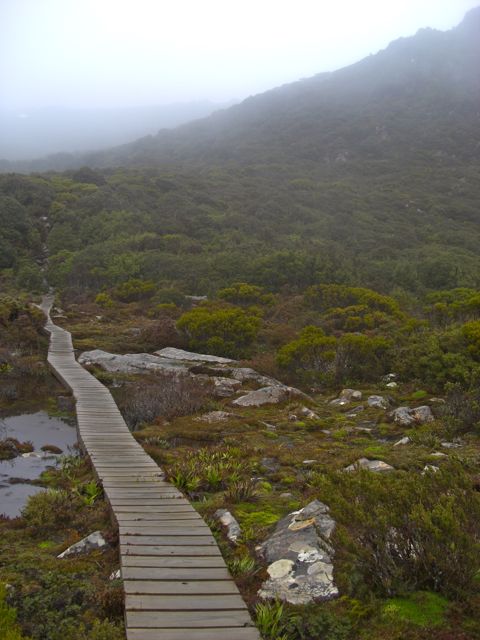 For the walk, visibility was low again, which wasn’t such an issue to Hartz, as the track is easy to follow. An easy hour saw me to the top. I knew from there on I was supposed to be following the ridge out to Snowy.. but I could barely see 10 metres ahead, let alone identify a ridge! And, as the day before I didn’t have any decent maps on my gps to tell me which way the ridge dropped off, so it was a matter of trial and error. Of course, I made the wrong choice, and after realising that I was on a too sharp a descent I back tracked and stuck to the other side of the ridge. I wove my way along, not really sure of where I was heading until I was nearly at the saddle between the two and found a bit of a pad.. a pad that on the way back I managed to stick pretty close to! Funny how you always find it on the way back!! 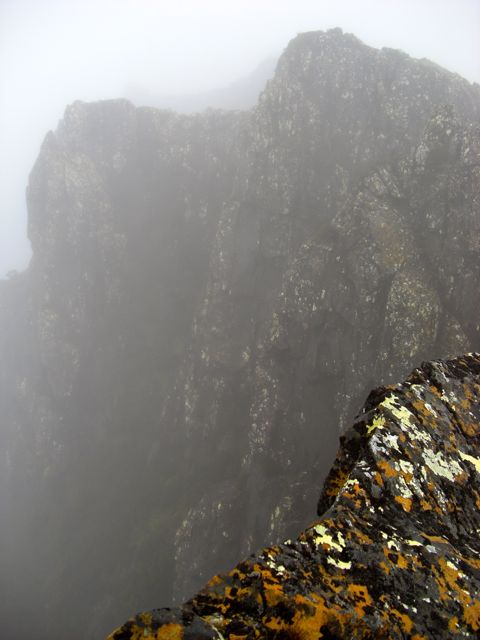 The ridge to snowy materialises out of the mist

From the saddle it was a pretty easy climb up Mt Snowy, but sadly there were still no views, and it was a tad wet and cold. It’d had taken a slow hour out between Hartz and Snowy, mostly cos I wasn’t exactly sure where I was going, but I imagine half an hour would do it if you could see. I headed back, retracing my footsteps instead of going via the tarns, as I’d been advised not to take that path if I couldn’t see. Going back via the occasionally cairned pad was much faster. I stopped by one of the lakes on the way back, sampled the ice cold water (always tastes so good), and headed home, satisfied with the days walk, and aware that even the ‘easiest’ of walks can present minor challenges in certain conditions.

Happy to say that the next time I ventured out here I actually got to see some of the view! Check out the Hartz-Snowy-Esperance-The Calf-Adamsons report for photos :).