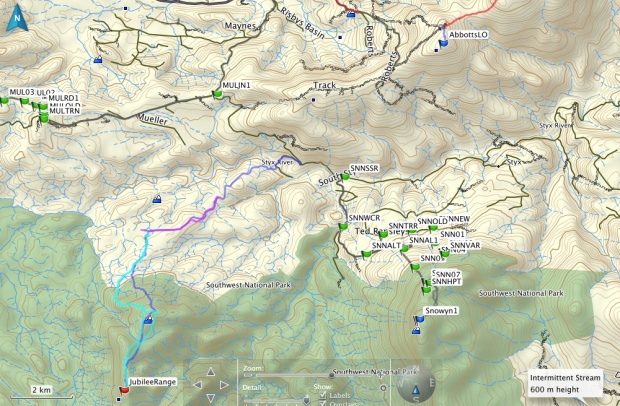 What a lovely little, or rather slightly longer, walk this is! The first time I did it was in the snow, which was lots of fun but also rather a bit of work, breaking trail through ankle, then knee, then thigh deep snow. Such fun! Seriously :). Probably not so much if you were to do it alone, but in a group it’s always easy to laugh as you or somebody else disappears down a hole (usually filled with water) in amongst the button grass, or face plants in the snow, tripped up by something unseen! It is important to know the road to take, and kind of important to know roughly where the first part of the taped track goes, just to avoid the worst of the scrub. 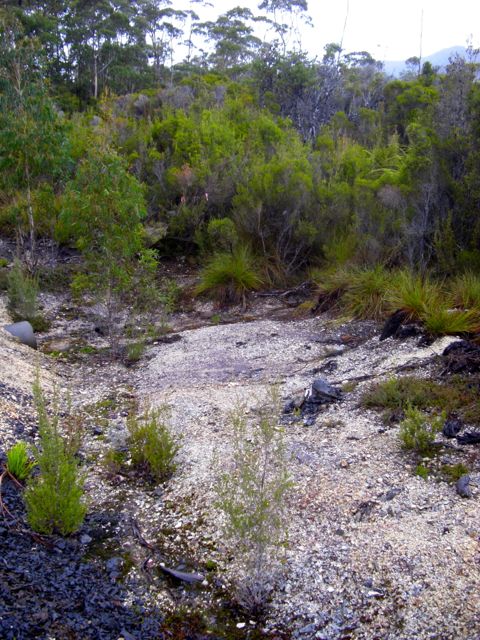 So, drive past Maydena and turn right on the Styx road, taking a sharp right u-turn to go back under the road and head south along the Styx road. Continue along it until you come to the sign-posted Jubilee road which forks to the right. Continue along this road until you need to take a right turn, and shortly after, a left. Not much further down the road is a few pink tapes and a small rock cairn on the left, marking the start of the track into what looks like a reasonable wall of scrub (but there is a nice path through it). 10-20 metres on there’s a spot to park cars on the right of the road. I’d suggest following a gps track for the road to make it easier. 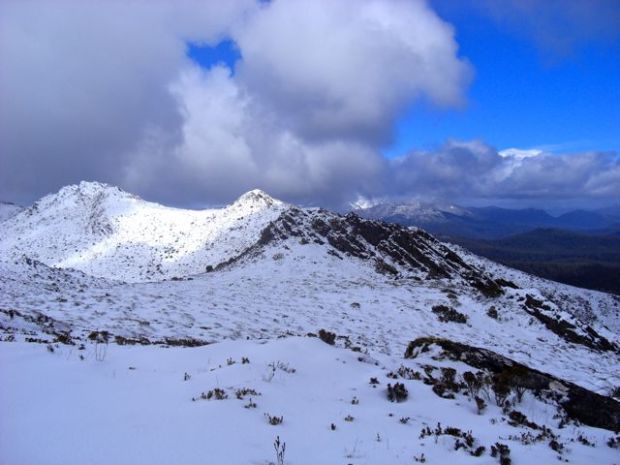 The start of the track takes you through tea/ti tree, which is semi thick and over head height, but there’s a nice pad through it, with intermittent tapes. Some faded pink (white now) and some more recent pink and orange ones. Once out of the tea/ti tree, you drop down a tad then pop back out amongst shorter tea/ti tree bushes, with button grass making an appearance. There are intermittent tapes here, and multiple pads through the scrub, making it pretty easy to move through. Look for a pink tape half way up the hill to the right. It is shorter to head to the left and straight up one of the ridges there, but looks to be scrubbier. If you spot the pink tape, head up the hill, there is a pad, and you’ll see more pink tape as you pop out on top, keep heading along, following intermittent pieces of tape. 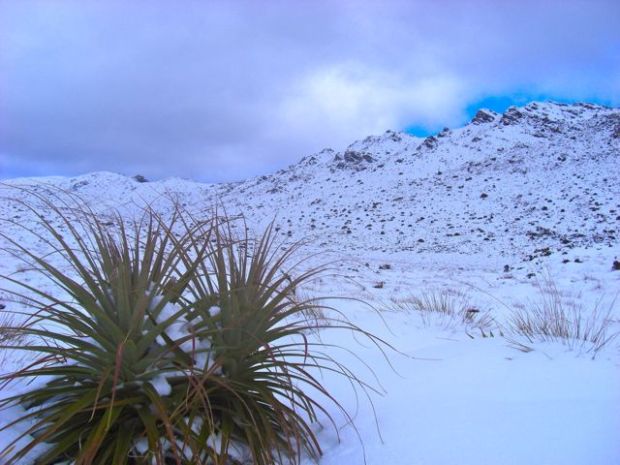 Pandani in the middle of nowhere

The path is relatively self explanatory, if you can see, as you just avoid the scrub, and stick to the pad. The pad is indistinct in parts, and there are several possible routes, just take care to be on one of them, or it’ll be harder work than necessary.  After pretty low stuff as you head south when you make the ridge line, you head east and there’s a little bit more stuff to negotiate, but nothing serious. 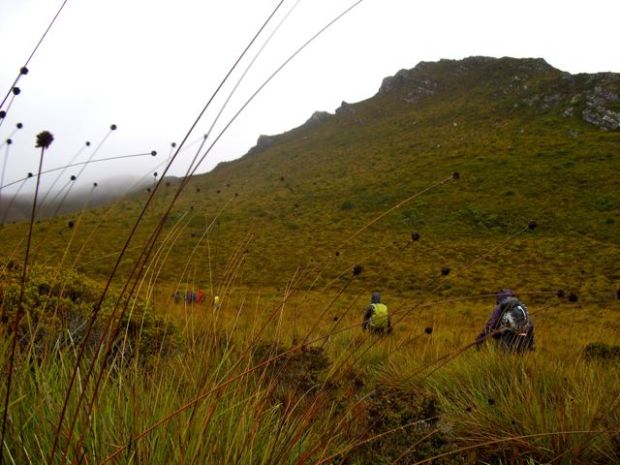 Across the button grass plain, ridge to the right

A gps route, or good navigation, will allow you to avoid most of it. The view starts to really open out as you continue heading up, and once you make the horizon which features a number of rocky bumps you can see the summit of Mt Jubilee (no points for peak baggers) to the west. You can also see the button grass plain between it and the true high point of the Jubilee Range and the ridge that extends south and provides access to it. 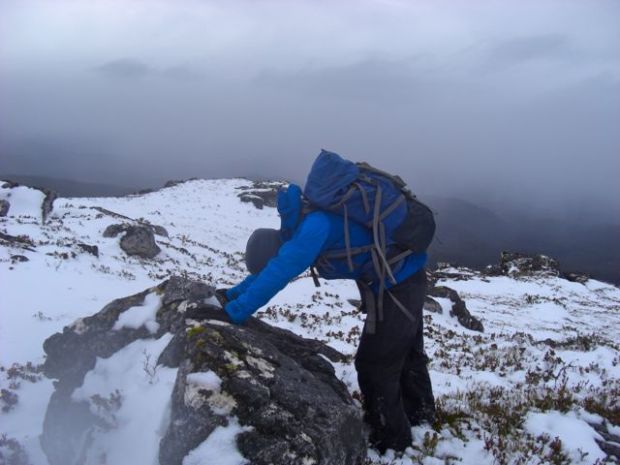 You have a choice to descend to the plain and negotiate button grass, or to head up to the ridge, battling a little scrub, then sidle round the rocky bumps. Both times, in the snow for the first, we took to the plains, which was quite easy travelling, only needing a relatively scrub free ascent to make the ridge line further along. I’d go this way if I was to go back. The only tip is not to descend straight down off Mt Jubilee to the plain, but rather work your way back along the ridge in a south westerly direction, as this allows you to avoid a tiny bit of scrub surrounding a creek that heads down to the plain. If you head across the plain, take note of the single pandani plant protected by a ring of tea/ti tree :). Love that guy! 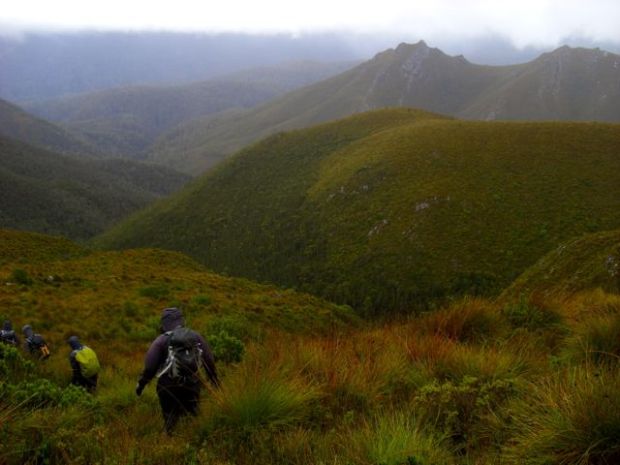 Dropping off the ridge, Snowy North in the distance, right

Once you’ve made the ridge line in the most sensible place, head along for about a kilometre until you make the true, but kind of flat, summit. Then for the long walk back :p. The first time, in the snow, we thought we’d try heading back along the ridge to avoid the thigh deep slog, but it was still pretty thick snow, and the going was no faster, so we dropped off. The second time we just dropped off in the ridge in the same spot we’d climbed up, and I’d go this way again.

Just follow your tracks back to the cars! Which can be easier said than done if you do the walk in winter with shorter daylight hours! Navigation through the final stretch of tea tree is a lot easier and faster with a gps if it’s dark :). 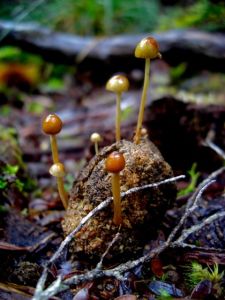