Jess is one of the newer ‘recruits’ to the medium/hard Pandani crowd, and with her quick smile, give-anything-a-crack attitude, rock climbing inclinations and pretty good aim with sheoak nuts, she fits right in. Like everyone else, she also brings a bit of her own flavour to each walk. This week I had the pleasure of walking with her. She had a week break from uni, and Monday was the only day I had free that we weren’t already walking, so we set a date for a walk, destination to be decided.

On the Sunday (because we’re really organised, and some things can be decided last minute, in fact, need to be decided last minute, to make the best of the weather), I asked her where she wanted to go. This was her walk, and I was happy to go anywhere, though I knew that would most likely mean a repeat walk, as I’ve done a lot of the peak bagging peaks close to Hobart. 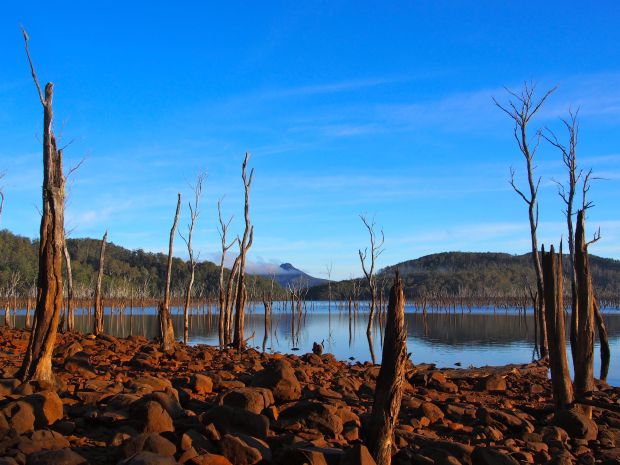 She surprised me though, and made me even more excited (if that’s possible) when she suggested Hobhouse. I hadn’t done it, in fact I’d been putting it off, aware that the Abel’s description mentions needing a key, and I’m not good at organising keys. I don’t like how it ties you in to going on a certain day, so that you can’t choose your weather. Jess had thought about doing Hobhouse a few weeks prior, solo, which I had thought was a pretty brave move. Even now, I knew I was glad for the company, aside from making for a much more enjoyable experience, company also provides extra security and reassurance, particularly for offtrack walking.

View from the button grass plain

We decided to follow the Abels description, though a friend tells me after the fact that there is easy and quicker access from the east, from the forestry side of the mountain. The night before we’d bumped our start time from 8am to 7am, just to give us more options. Jess kindly offered to drive, for which I was most grateful. I was still tired from the work week, and the driving the day before to Snowy North.

Up through the scrub.. mostly bauera

We arrived in good time, and despite the mist for most of the drive the only wildlife that came close to the car was a line of parrots sitting across the dirt road, a brown hawk of some kind (goshawk or sparrow hawk, I’m not sure which) that flew one way, then back across the front of the car, and a billion currawongs! We put on boots, made last minute pack rearrangements, and set off. Our timing couldn’t have been more perfect. Though it was still cool, there was evidence of blue sky behind the white, and we had high hopes. They were justified, and as we walked along the road the sun broke through the cloud, and lit up the trees and path in that new, fresh, crisp morning light. It was reason enough to smile some more.

Just a few fungi out and about..

The brisk road walk was interrupted when all of a sudden we came to the shore of Lake King William, and let out exclamations of pure delight, surprise and joy. The water was as blue and almost as still as the sky, the dead trees’ reflections almost as sturdy as their lifeless trunks, tinged golden by the sun. They were to look a lot greyer, more tired, older, when we returned on the way back. King William I sat nicely between more immediate land masses on the horizon, and we took some time to enjoy, and attempt to capture the moment. My new camera came out briefly for a bit of a test run before being returned to the pack in anticipation of wet scrub. 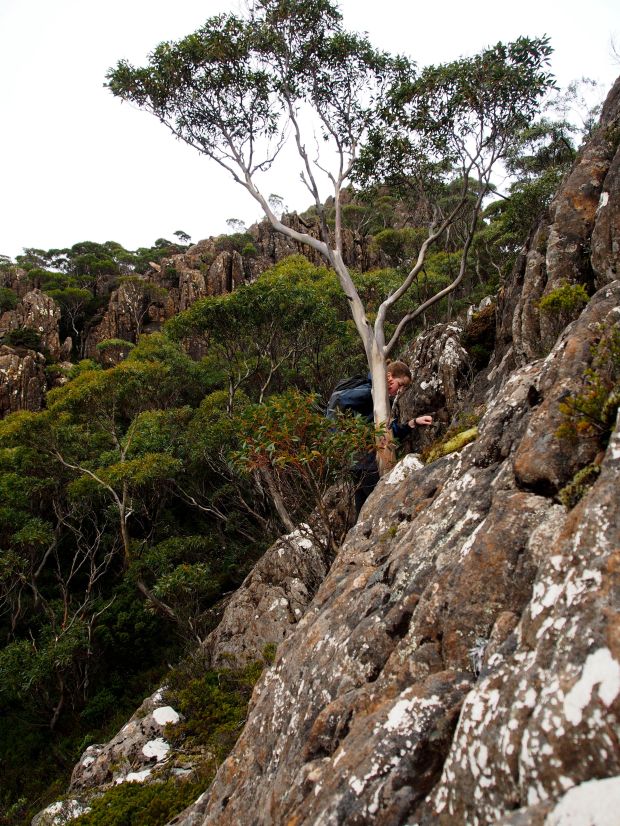 Heading up.. Jess can’t resist a little bit of a play on rock

The road led to the log book, which hasn’t even had two whole pages filled in since 2008. That seemed a bit sad, because Hobhouse is rather a nice mountain, with some stunning views too. Jess did the honours, and then we followed orange tapes which led us to the old bombardier track. Once or twice we had to search around for tapes when it was indistinct, but in general Jess did an excellent job of just following the most likely route until we found more tapes. The birds kept us company as we walked, and I pointed out the call of the olive whistler to Jess, remembering when I’d first been taught it. 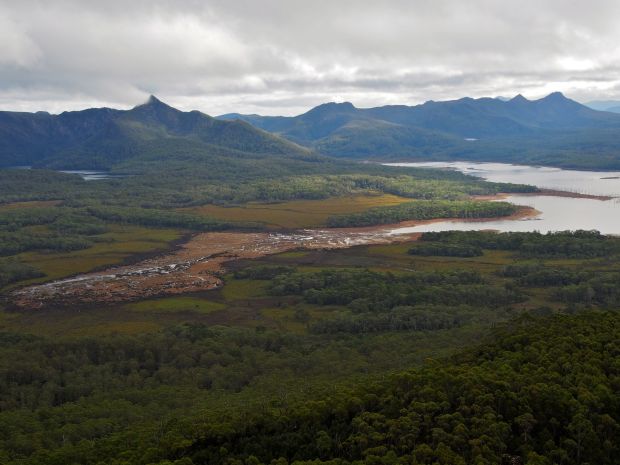 The views WERE pretty speccy.. the King William Range.. Slatters the pointy thing on the left

The change in vegetation was fascinating.. from dry schlerophyl (or however it’s spelled), to button grass, and then to wet myrtle forest! The button grass plain was awesome, with a lovely hint of the view to come out to the west. I learnt later from a friend that button grass plains are often evidence of Aboriginal firestick farming, where they burnt out areas to provide food (young button grass shoots) for animals to eat, and that certainly seems to be the case here!

A little more up…

After following the track through myrtle forest, and rounding a bend that marked the end of the ridge that we would be climbing up to get to the summit of Hobhouse, I mentioned to Jess to look out for any sign of a pad or track off to the left. We didn’t know if there was one, there was no reference to it in the Abels, but we assumed there might be. But after walking a little distance, and not seeing anything except for thicker scrub, we decided to head back to the bend, and go up the ridge through the more open myrtle forest.

And then we’re on the plateau bit.. is that shadow in the distance our summit? No…

So we did.. and after 5 minutes of walking ran into tape!! That was a surprise, and very much welcome, as it meant we might have some kind of pad to follow through the ‘trackless, difficult scrub’ (according to the Abels). As it turned out, the scrub, mostly bauera, wasn’t as thick as it could have been, and though it slowed us a little, it wasn’t so bad. The tape was generally speaking well placed, but as frugally as possible, so in parts you did have to walk on with faith that you’d spot the next piece before walking too far off the route. In this fashion we continued on, disturbing a flock of black cockatoos, and eventually spotting the kind of cliff line that the Abels mentions, and, as informed, finding it much easier than it appeared to climb. 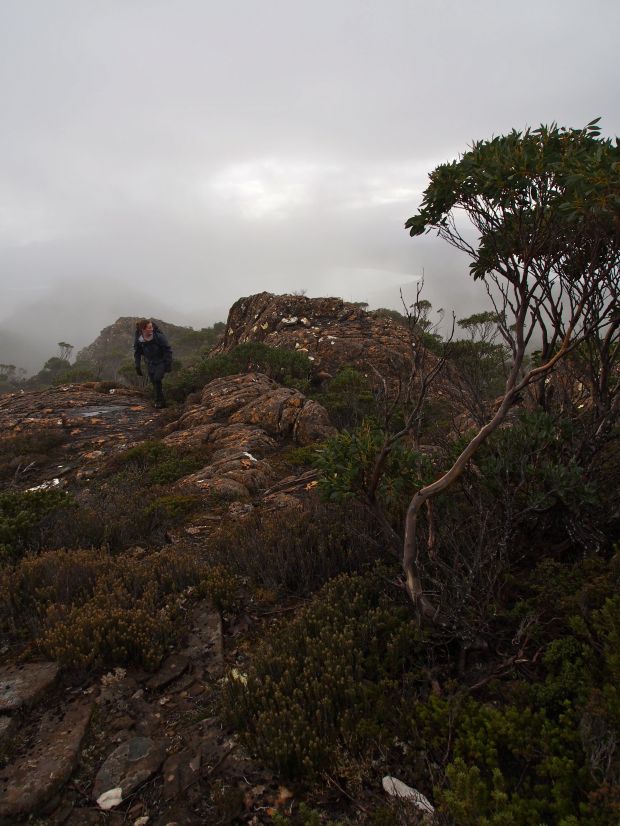 Heading towards the summit.. brighter patches of light amongst the white fog hinting that there’s something out there..

Here we got our first views of the northern end of the King William range and the lake, and I think both our excitement levels went up a notch. Jess had a bit of a play on rock.. and there was plenty of it to tempt us, but I think we were both aware of the time, and the wise decision was made to get to the summit, and see if there was time for a play on the way back. The last little bit of climb, and we found ourselves on a bit of a plateau. Sadly, at the same time, the cloud came down, and we could only see a vague shadow in the distance that we thought might be our summit. 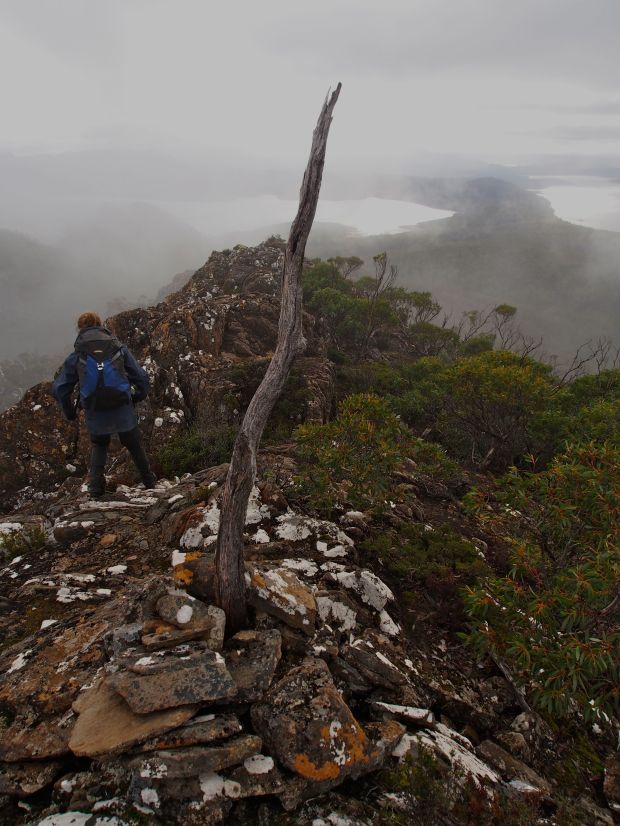 The summit of Hobhouse.. and a little bit of view.. it was pretty exciting to have even just this much!

The tapes gone now, and just a pad to follow, I worked of my gps, and we discovered that no, the summit was somewhere beyond that shadow. As we got closer we had glimpses of where it might be, and after a bit of a rise, with rock ahead, I told Jess to go on, it was her mountain. Up a bit of rock (because it was fun), across, and up a slight rise, and there it was, a cairn with a stick poking out. We were mostly surrounded by white, with a few small patches of brightness out to the west, but the feeling was good. 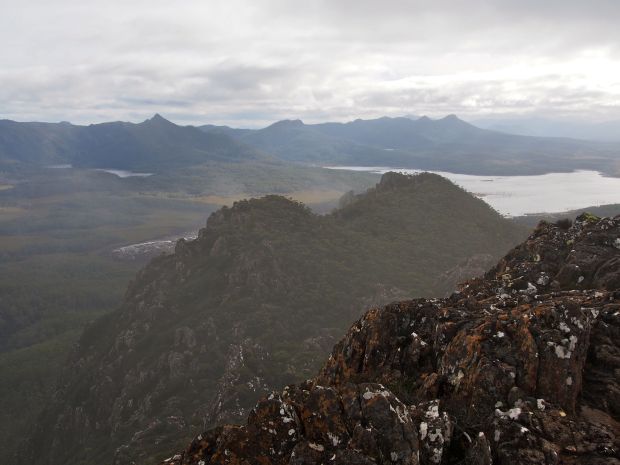 And then we got a bit more view.. the King William Range.

As we stood there, taking photos, being in the moment, the mist continued to move around us, and opened and closed pockets of view. It became clear that it was racing up the northern side of the mountain, up and over us, and we wondered if there’d be a clear break in it. There were one or two, during which my eye was glued to my camera, before we decided to shelter behind a rock for a bite to eat. 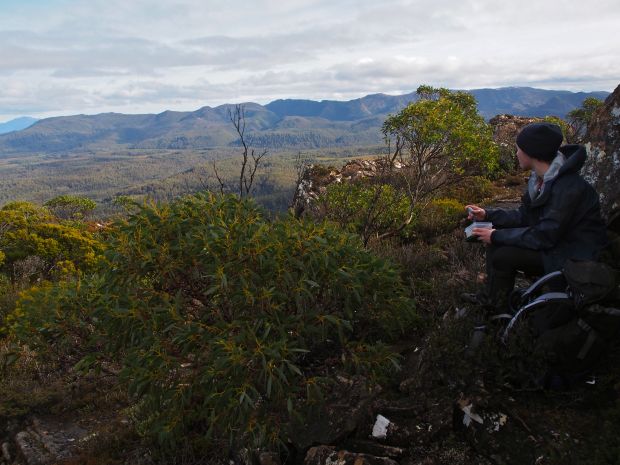 And by lunch time, it was as good as perfect!

Our timing couldn’t have been more perfect. As we sat and ate the western horizon cleared up, and though there were still clouds about, we actually had blue sky! The whole of the King William range was out, Diamond Peak sticking its head above the southern end of it, the Spires etc further south. Amazing how much you value something you don’t expect, have ruled out as a possibility, or expect to lose at any moment.

Looking back at the summit of Hobhouse, under some blue sky!

It was cold, having stopped, so cold in fact that Jess’ tights that she was wearing under her shorts had developed a thin layer of moisture on the outside. She made reference to the simple things in life and drew a smiley face with her finger in it. She was spot on, and it made me smile.

And the lake on the way back.. quite a different mood now

Given it was past 1pm and we were getting cold, after helping Jess eat some of her chocolate 😉 we pushed on. Realising I’d been in the lead a fair bit, and knowing that it’s the fun place to be (for me anyway, unless I’m really tired), I offered it to her. She did a fine job sticking to the route, despite not looking for the tapes, until I think I might have confused her! But it didn’t really matter, we were on a pretty good ‘pad’ of sorts (certainly no worse than the taped route) and it headed in the right direction. When it started to veer off we headed back to the pink tapes, and Jess continued in the lead. This time we followed the tapes right back to the road, just to see where they came out, and discovered that had we walked a further 80m from where we’d turned around, we’d have found a cairn and tape marking the track up! Oh well, we know for next time ;)!

We’d made good time, and plodded along steadily, off with our thoughts. I think I provided some unexpected entertainment by falling most ungracefully hard into one of the creeks we had to cross! That had us both laughing. We signed out of the log book, stopped by the lake again for one or two more photos, and made it back to the car as the sun started to get low. Though we didn’t quite have time for the usual mucking around and climbing just for fun that we do on Pandani walks, I know I thoroughly enjoyed the day :D!